A new book - and re-starting my blog

And so it begins again.

Its been a while since I added to my blog and the time is right.  I have a new book written and a new crowdfunding campaign aimed at making it happen.

The new book is something very different from my usual fare.  There is no Victorian horror here, there are no grisly and ghastly murders, no secret societies to bring down, no Finnish folklore.  Instead what I have written is a love story.

Yes you read that right, a love story.

Do not worry however, I haven't gone completely Barbara Cartland (although some mornings I do feel as aged and feeble looking).  I'm not sending manuscripts off to Mills and Boon at a rate of one a week, and I don't look as if I put on my make up in a moving car in the dark, although this may yet happen.

The Love of Death, for that is the book's name, is the story of how The Grim Reaper falls hopelessly in love whilst going about his normal, and quite unsavoury, business.  Its a comedy, written very much in the vein of a Pratchett or Gaiman novel.  It's set in a bizarre world full of odd characters, incompetent angels, conniving demons, and a worryingly out of touch, and childlike supreme being.

Initially it wasn't going about the Grim Reaper at all.  The leading character was going to be the Devil himself.  But I wondered if I really wanted to be the writer of a book called The Love of Satan.  Sure there would probably be an audience for it somewhere in the world (satanic cults, Scandinavian death metal bands etc.) but it wouldn't tell the story that I wanted to tell and I settled on someone who I thought would make a much more interesting and unexplored character. 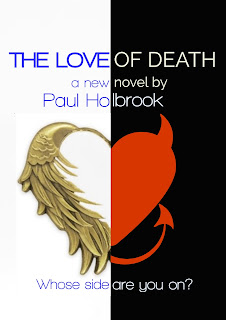 It started as a small piece, a simple written scene with the two central characters, Grim (as he would become known throughout the book) and Tracey, the unenthusiastic object of his desires.  I was a basic premise, Grim was simply trying to persuade her that he was not just some weirdo kidnapper, who randomly rescued about to die women and then tried to get into their knickers.  The scene developed, as did the characters and I began thinking about the bigger picture.  What would be the ramifications for the world if the Angel of Death suddenly fell in love and abandoned his post?  Could he really persuade Tracey that she was the love of his very long life?

If you like the sound of this book and want to know more just go to my new Unbound page https://unbound.com/books/the-love-of-death/ have a more in-depth read of what it's all about, watch a video I made one afternoon, and even read an excerpt.

If it's your cup of tea then please pre-order your copy.  The more people that pre-order it the sooner it will get published and you'll be able to read the thing.

Over the next few weeks and months the blog will be back in full flow.  I have authors aplenty to interview, who will be visiting Holbrook Towers in the vain attempt to peddle their wares, as well as other blog posts highlighting the concept of the new book, weird art that I have created whilst writing it, and new short stories which may or may not be related to the book.

So keep an eye out, I'm aiming to post at least one a week on a Sunday.