I dreamt of rats as big as dogs scratching at my skin, they clawed and ripped at my skin causing my flesh to burn.  In desperation I pulled myself from sleep and into the horror of my reality.

The sun blazed in through my bedroom window, waking me me from my deathly slumber and scorching my pale skin which was unused to daylight.  It's not that I'm a vampire, I'm just a miserable bastard who hates going out in the daytime.

I cursed Manson for drawing the curtains so early, and resolved to find and flog him before breakfast.  Throwing back my blankets I rolled from my bed, and landed with a thud on the floor.  I was not a morning person.

Face down on the floor, I looked through the space between the floorboards and could swear I saw a movement.  Rats! I thought.  It was obviously time to call in the ratcatcher again, he came to the Castle of Despair a couple of times a year, to flush out the vermin.  Sometimes I would let him take some of the wasting bodies from the dungeon to use as bait - it was a Quid Pro Quo type of arrangement.

I hauled myself to my feet, and staggered to my the end of my four poster where my bathrobe had been laid by Manson earlier in the morning when he had brought me my obligatory pot of high caffeine coffee and a dozen horse tranquilizers - The breakfast of the Damned.  I rang the bell and sat on the end of my bed waiting for Manson to attend.

It was as I sat there, contemplating my navel, that I heard scratching sounds coming from the floor.  They were louder than normal - 'rats as big as dogs' - it dragged on the wood and thumped and fumbled as if too large to crawl and scuttle through the underworld of the castle.  I stood and followed the sound of the rats, they were over by my dresser.  I waited for their sound again, and when I heard it jumped on the spot, making a loud bang.

Rats don't talk, I thought and jumped once more.

I got down on my knees and tried to see through the gaps in the floorboards, there was an eye, wide and bloodshot, staring up at me.

Our conversation is recorded as follows;


Good grief!  How did you get under the floorboards and who in the blazes are you?

Dear God, man! I can see right up your dressing gown from down here and what you have under there is banned outside of Germany! How did I get here, you say? Why, you only double-locked the portcullis – such lax security positively invites scoundrels in. I am Maximilian Hawker and I am looking for people to preorder my book. I had hoped you might harbour a small group of bibliophiles under your floor as I do, but you disappoint me, sir. 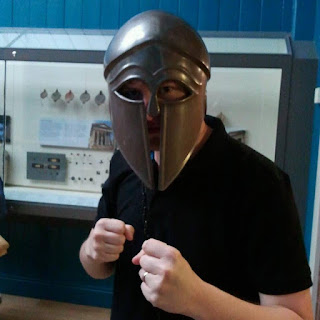 You’ve done what?  You’ve actually written a book?  Tell me all about it.  Break it down for me into words I can understand.

Ah, interested in my novel, eh? Well, you know the Troy of Greek myth? It was, in fact, a real city and it was called Wilusa. When I was younger, I wondered whether the stories surrounding Troy had any basis in historical fact, so I did research. For years. And from my research I have written a completely fresh take on an ancient tale that does away with the myth in favour of documented evidence and archaeological breakthroughs. So, my book is about Troy, but not remotely as you think you know it. 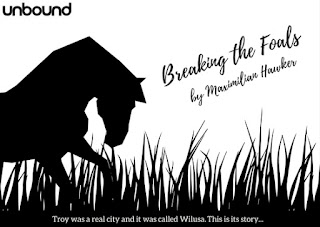 I demand a present from all of my visitors.  All those that do not comply with my demands are thrown into the darkest cell in the dungeon with only the spiders for company.  Tell me what have you brought me today?

You find a stranger under your floorboards and demand a gift of them? What kind of an oddball are you? Never mind.  Okay, a gift… Aha! I offer you the gift of knowledge. In ancient Wilusa (aka ‘Troy’), it was legal to make sweet love to a horse. Truly, these people were passionate in matters equine. There – I have enriched your life.

I am a generous man.  I have something for you also.  I present you with the gift of Trump.  You can say anything and for some reason lots of people will believe you.  You can tell people how brilliant you are and they will worship you for it.  Tell me, how would you use your newfound power for lying?  Would you use it for good, or for mischief?

Your gift trumps mine. Boom, boom! Ahem. Righty-ho then. I have a silver tongue as it is, but if I had that added Donald-stamped assurance then I would be mischievous on a truly petty scale. However, it is tempting to use the power of lying to do good on an industrial level instead.

You’re a superhero.  Really you are.  Unfortunately for you, you have been blessed with the most useless superpower ever.  What is your odd power?  How would you use it to fight crime?

Did you ever see the movie Super? Chubby bloke runs around in a costume hitting petty criminals with various odds and ends either killing them or giving them life-altering injuries all while yelling, ‘Shut up, crime!’ If I could fight crime, I would do it like that. But if you want to push me on a particularly useless superpower, I would have to plump for the gift of being able to imitate a cat. Living in Croydon, we have the infamous Croydon Cat Killer on the loose and he has become notorious in these ‘ere parts. I would wander the streets at night yowling my head off and crouching on all fours to try and attract the bastard. Then I would lamp ‘im! 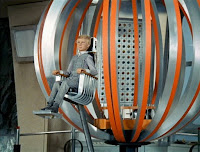 I used to love Joe 90 when I was a kid.  I liked the idea of a machine that could insert skills and knowledge immediately into your brain without the need for all that learning and endless hours of practice.  It was quite unfortunate that the Matrix nicked the idea to give Keanu Reeves Kung fu skills.  If you could have one skill inserted into your mind and immediately make you an expert in your field what would it be?

I’ll be boring and honest here: I work in frontline children’s social care, so I would want complete knowledge of all social care, housing, immigration and welfare legislation implanted into my brain for easy retrieval for the rest of my career. 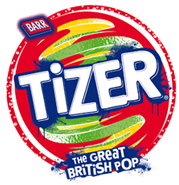 There is a desperate lack of water in the world.  Regional water companies have been taken over by fizzy drinks makers.  They offer a choice of different types of drink that will be the only thing that you’ll be able to bathe in.  What type of pop do you fill your tub with?

Tizer. Do you remember the advert for that drink? The crazy dude with his head being opened and Tizer poured inside. If it does that to your head, think what it would feel like on your boll– Ahem!

A fantastic new car race has been introduced, think Wacky Races crossed with the cannonball run.  You have decided to enter in order to get the chance to win the $100m prize.  Tell me about your car?  What modifications would it have to give you an unfair advantage over your rivals?  Will you have a co-pilot?  And most importantly of all, what is your vehicle called?

My car would be called Gary. Gary would basically be the red-and-grey jeep from the original Jurassic Park with an enormous cannon mounted on its roof with the ability to fire explosive livestock at rival vehicles, as this would surely be the most effective means of preventing others from winning; it’s a real bugger to drive an amped up Porsche 944 with a gore-soaked udder caught in your windscreen wipers, dontcha know? And I would be more than happy to have Katie Hopkins as a co-pilot – if I run out of livestock, I’ll send her up into the cannon.

The world hails you as the foremost authority on food and drink.  You have unlimited power in this regard.  Tell me one food that you will consign to the pits of hell never to be eaten by another living soul on this planet, and the food that you would make compulsory and a crime not to eat on a daily basis.

I would consign salad to the pits of hell as I am not a hamster and do not wish to dine as one. If I had to make one food compulsory to eat on a daily basis I would have to choose chicken vindaloo: Armitage Shanks would have to completely rethink toilet design for our entire species.

Stalking is underrated.  You are now on my list.  Where can I find you on the World Wide interweb?  Do you blog?  Insta? Snapchat?  Tweet?  Any other places that I can find you online?

Well, you can preorder my novel ahead of its Autumn/Winter 2017 release over at https://unbound.com/books/breaking-the-foals and if you’re a fan of Twitter you can follow me at @MaxHawker. I do not blog, Insta or Snapchat though as it ain’t my cup o’ tea. Now, if you’re quite done with me, I have other floorboards to infiltrate.

'Er... Sir?'  I was distracted by Manson's voice behind me.  He was stood with a tray carrying my breakfast.

'I was wondering who you were talking to, My lord.'  Manson looked edgy, he knew it was often a mistake to question me.

'Why the man under the floorboards, stupid.'  I snarled.  'Who else would be under there?  Rats?  Rats as big as dogs?  Do you think me mad?'

'Of course not.'  he murmured.  'The man under the floorboards, I think I might have heard of him.'

I looked down again, the wild staring eye had gone, replaced by darkness.

I jumped to my feet and snatched the tray from him, taking it to my bed an.d throwing the bedclothes over me again.  'Get out, Manson!'  I screamed.  'Leave me to my breakfast!'

Later that day I investigated further this book that he had mentioned, and I would strongly encourage you to do the same.  If only to prove that I hadn't dreamt it all.  Rats as big as dogs.

If you have enjoyed this blog interview and wish to star in your very own episode please get in touch at caraticuspholbrook@gmail.com

You could also do me a huge favour and give your support to my own book  Domini Mortum, which can be found here www.unbound.co.uk/books/domini-mortum