It was a beautiful sunny morning at Holbrook Towers.

Birds were singing and they swooped and climbed in the unseasonably azure sky, on the edge of the nearby 'Forest of Certain Death', small woodland creatures danced and played in the dappled light.

I stood on the battlements soaking in the warmth of the day, and the first inklings of a smile began to work their way onto my face; what a time to be alive!

To the regular reader of this journal, this scene may seem unusual.  Why was I not stood there, foul of face, and shotgun in hand, peppering shots at the birds as the soared and dipped above my castle?  What was wrong with me that I was not hurling rocks and cannisters of burning oil at the woodland animals, gloating as the burned to a crisp?  Was I ill?  Had I been on the sauce ealry today?

The answer, dear reader, came from the experience that had befallen me before I had even looked out of the window that morning and seen how beautiful the world was.  In fact I had woken in my normal state, impossibly hung over, irately furious at my butler Manson for waking me with breakfast in bed, and murderously desperate to empty my bladder.

I had jumped threateningly from my bed towards Manson, picking up the nearest weapon to hand, which happened to be my favourite mace (I always keep my most favoured weapons of murder and senseless violence near to my bedside as you never knew who would be coming to my bedroom at night in search of notoriety or revenge).  Manson, breakfast tray in hand, back away nervously. He had been on the wrong end of this mace before, his false ear was testament to this.  He avoided my clumsy swings long enough for me to remember that my bladder was full to bursting and that if I didn't visit the little boys room, there would be yet another terrible mess to be mopped up.

It was as I stood relieving myself, that I was disturbed by a noise behind me.  I was sure that I hadn't left a nearly dead body in the bath again, but I couldn't stop the job 'in hand' to turn around and look. There was a clunk, and a rattle, a scrape and a rustle.  It was all most confusing.

I finished with a flourish (of course) and swung to see who the intruder was.  The bathroom was empty, but it would seem that the noises were coming from my bathroom cabinet, a place usually frequented by industrial strength pile creams and horse tranquillisers.  I picked up my mace and approached it slowly.  Was it a rat?  Mice? Yet another oversized spider?

With a speed not often seen by me, much before lunchtime, I tore the cabinet door open, only to find a man.  Yes, a man, perched on one of the shelves and gorging on Colgate.

Our ensuing conversation, is recorded (as all utterances are recorded by a vast array of microphones placed around the castle) as follows...

Oh my Lord!  How did you get into my bathroom cabinet?  Stop eating the toothpaste and tell me who you are?

I, dear fellow, am the former spy and creator of two novels featuring  Moffat the Magniloquent. As for eating your Colgate Spearmint toothpaste, eat it I must, for I was a Mint Spy.

Books?  Tell me all about your latest? You’ll need to be brief though, I have the memory span of an earthworm.

I have but recently written No Good Deed, the sequel to Gibbous House, which is currently the subject of a Tub-thumping -that is to say crowdfunding - campaign at Unbound. Shall I repeat that? What do you mean, repeat what? 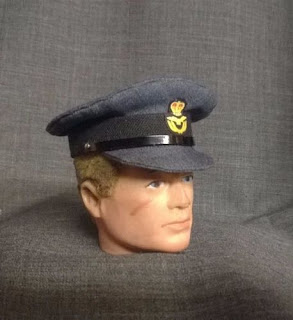 Have you brought me a present?  You better had, otherwise you’ll get locked in my attic with all my spooky dolls.  What is it?

Coincidentally I have brought you a doll of my own… or at least part of     one. It is a doll I had occasion to use in several arcane ceremonies,     however the voudoun never did work on my Squadron Commander. His     head is still connected to his body as far as I know. (see picture)

I am not a man without manners.  I have a present for you as well.  I give you the gift of Van Dyke. You are able to impersonate any accent in the known world, everyone understands you, you are able to converse with the world.  What is your message to the people of earth?
“Klaatu barada nikto” I fear it will be no more effective than last time.
I love the movie Groundhog Day, however the most infuriating thing about it is how Bill Murray has to wake up listening to Sonny and Cher every morning.  If you found yourself in Bill Murrays shoes and had the choice, which song would you open your eyes and greet the world to every morning? On the flip side, which song would have you crawling from your bed every morning like a grizzly bear with an arrow in his arse?
A song that ALWAYS makes me smile is Chemistry by Semisonic. A tune guaranteed to give me toothache, sore head and other sundry ursine provocations is… Whatsamatta You, by Joe Dolce
Have you ever thought about what it would be like to live forever, until the end of time?  I have, in fact I intend to be the last man alive on earth. If you could bestow this gift on anyone who would it be and would it be a curse?

Yes, I have. I think it would be boring. I know the Devil is bored and it seems as though God has Alzheimer’s, so maybe immortality isn’t all it’s cracked up to be.

Waterworld – not just an overblown and greatly derided Kevin Costner movie from the nineties, it’s actually going to come true.  Do you think you could live in a world without land; no trees or hills, mountains or fields. Just you and your boat, roaming the flooded wasteland?

I have a confession to make: I am the worst swimmer ever to be allowed to fly as aircrew in the Royal Air Force, so no.

You have been given $300m by a major film company and told to create the greatest ever action movie, think Seagal but with special effects, Van Damme with a budget, Norris with acting skills.  Here’s the rub though, it has to be based on a Dickens book. Pitch me your best shot, who stars in it? How will you turn Victorian Britain into a Hollywood style. Popcorn muncher? Is it brutal and realistic, or layered with more cheese than a Frenchman’s larder?

“Sidney Carton, Charles Darnay: the rôles Schwarzenegger was born to play. Set against the background of Revolutionary France, Arnie plays the effete French lover and the duplicitous barrister with his usual erudition. With Olivia Colman as Mme. Defarge, “A Tale of Two Twins” is both boffo box-office and a shoo-in for the Oscars”

Let’s do Blind Speed dating!  With a difference! Behind the screen are four eligible people, both male and female.  You have to spend a long weekend in an isolated log cabin with one of them. Which one do you choose?

Steve – Steve likes long walks in the country, cuddles with his dog, and cooking fine cuisine for romantic nights in.  He is also a fan of farting loudly, collecting his urine in milk bottles, and knitting scarves from his pubic hair.

Rick – Rick is possible the most physically attractive man that the world has ever seen. He works tirelessly for world peace and an end to poverty.  He also likes to wander naked and loves showing off his great helicopter trick.

Sarah – Sarah is undeniably fun to be around. She has a joke for every minute of the day, and not a day goes by without her making everyone around her laugh.  Also not a day goes by when she washes herself and she is followed by flies wherever she goes.

Michelle - Michelle is like a walking encyclopedia. There is nothing she does not know it can discuss at length.  She is warm, friendly and has an infectious smile. Michelle may be responsible for the brutal deaths of both her parents and a long list of hitchhikers, woodland animals and past boyfriends.

Could I not invite them all and murder them one-by-one?

Where are you in the great and virtual world of the interweb?  Do you tweet? Insta? Blog? Tell me where you are for heaven’s sake!

I have been known to tweet @EwanL, I am on Facebook here  , however my marketing agents Please Allow Me Inc maintain a page here . My blog is here and charts my life in Spain, the leaving of Spain, sundry book reviews and general bloggery. 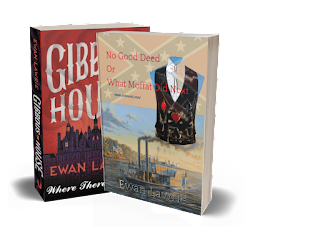 He was beginning to look a little uncomfortable, crammed as he was on the smallest of the shelves and I pulled him out so that he could stretch his limbs once again and restore the blood in his extremities.

Here was a kindred spirit to I.  Here was a man who relished writing tales of brutal murder and uncompromising violence.  Here was one that I probably shouldn't have dragged kicking and screaming down to the cellar and my vast array of torture toys.  I paused for a moment, weighing up my options.  What point was there in a long but satisfying torture session, the man would probably revel in the experience.

Against all my cruel natures I led him up to the battlements of my castle, where we stood in the beautiful morning sun and gazed out over the idyll of the grounds and forest below us.  I promised him that I would read his newest book, as it transpired that I had already read and thoroughly enjoyed his first.  I would encourage you to do the same, you can find Gibbous House here;

and you can go and support his latest tome here;

But was it this discourse with a fellow writer that had brightened my mood so unussually this morning , I hear you ask?

Had finding a like-minded author brought about a warm happiness within me, a sense of wonder and awe at the world around me that had not been apparent on my visage in many a year?

No it was because once I had had enough of the conversation, I pushed him off the battlement screaming and flailing into the cold dark water of my moat below.  I think he survived the fall, and even perhaps the crocodiles.  I'm not totally sure as I had already spun on my heel and gleefully descended to my bedroom once more, to soundly beat Manson for waking me.


If you don't want to suffer the fate of Ewan Lawrie, or Manson the butler for that matter, you would also do well to go to https://unbound.com/books/the-love-of-death/ and give my latest book a gander.  It's a comedy about my very good friend The Grim Reaper, and what happens to him when he falls in love.

Go on, what the devil are you waiting for?
Posted by Paul Holbrook at 01:26