A thick blanket of grey surrounded and obscured Holbrook Towers.  If you had been stood on the outskirts of Nether Stinkhole on the plains below (and I can advise you not to bother  if you were ever tempted) then only the tallest tower of the castle would have been visible, poking up out of the dark curtain of suffocating smog.

This was a common phenomenon, especially when my home was beset with one of the many frequent and violent thunderstorms that seem to plague me wherever I go. The smog however was not however a natural occurrence.  The mist and smoke which surrounded  the castle was one of the many side effects of my desperate attempts to create life; the smoke billowing out from the window of my laboratory.

On this particular night though, to those that were listening from outside (if one was to be brave or naive enough to come anywhere near my ancestral home)  they would have supposed that I had at last succeeded.

"IT'S ALIVE! ITS ALIVE!" came my shrill cry, as the lightning rained down on the castle, striking the large iron conductor which was being held in place by my butler, who now had smoke of his own poring from his ears.

I held the yoghurt aloft, as the sound of my voice echoed around the damp stone walls of my diabolical laboratory.

Suddenly a movement in the corner of my eye caused me to turn suddenly.  Slowly appearing from the side of the window, out of the mist and smoke, was what appeared to be the head of a dragon.  Strange, I thought,  I thought I had caught the last of these and put him in the pens at the back of the castle.  It was only as it drew nearer that I saw that the dragon's head was carved from wood.  I ran out into the hallway and opened the door.  There appeared to be a longboat in my moat.

Looking up to the fore of the boat I saw someone who I instantly recognised.

"Welcome, Sif!"  I called.  "Have you come to see what terror your husband's lightning has brought here tonight?  Park up Skoblaonir and come in for a cup of tea!"

It was only when I got nearer that I saw that it was not Sif, goddes of the earth at all, and the boat she sailed was not magical (although I did wonder how she had sailed it into a moat).

No matter, I fancied a cup of tea anyway.

Oh hello, park your longboat up in the moat and come rest your sea legs on a pouffe in Holbrook Towers.  Who are you and what's that book in your hand?

Heill. (That’s Old Norse, by the way, no goose-stepping here.) I’m Suzie Wilde and I’m clutching my debut novel like a life-vest. It’s called The Book of Bera, Part One: Sea Paths.

Can you sum up this book of yours in no more than 28 words? I have the brain of a guppy, with the memory span of mayfly, I can't retain anything longer than that.

One Viking girl’s choice between salvation and revenge.That mainstream mayfly enough for you?

“Mutiny! Mutiny! They've all got it…” oh sorry that doesn’t quite work. Anyway, your crew has turned you and cast you adrift in a rowboat.  300 miles from the nearest sight of land, Water, water everywhere and all that.  Who would you want with you and why? And how long do you think it would be before you decided to kill and eat them? Roughly 3 hours, after which I become feral even on dry land. If I’m allowed a dead person I’d have to go for Sir Ernest Shackleton (navigation and morale-boosting); if fictional, Billy Bunter (sure to have tuck until he becomes tuck himself); plus Sean Connery circa 1968. A girl can dream.

Do you like reading the genre you write in?  Or do you find yourself being over critical and getting frustrated?

My genre has been described as ‘true fantasy’ : meaning even the undead and twin spirit ideas are genuine Viking beliefs. Draugr = Drorgher and fylgja = skern, a twin-spirit with attitude. So I haven’t read any books quite like it. The closest would probably be Philip Pullman’s Northern Lights trilogy. I think I am to the Past what Margaret Atwood is to the Future. Despite this, I’m always over-critical of my own work but never get frustrated as I love editing.

You're woken in the night by a strange light in the sky outside.  As you step out of your back door, you are sucked up into an alien saucer and whisked away to a distant planet.  What would you miss most about earth, and would you be prepared to start an intergalactic war in order to get back home?

Dogs. Specifically, steady old Labradors – so even if there was an alien pet equivalent, with the same ability to inhale its food, roll in Martian poo or chase smaller pet equivalents, I would certainly start an intergalactic war to get home to Ted. I think that’s why dogs feature strongly in the book, as well as other animals. One episode makes strong men cry – and naval officers.

You've been very bad.  You are condemned to spend an eternity in hell reading the same book over and over again. What book is it that would make you really regret your sins on earth.

The Faerie Queen by Edmund Spenser. I hate allegory generally and this one with passion. Hatred is a sin, one of many I possess – and this (unfinished!) work praises Holiness, Temperance, Chastity, Friendship, Justice, and Courtesy. Come on. I sometimes dream I am at UCL again and forced to ever finish the damn thing then sit an exam: in fact I’m going to have to lie down now.

Would you be prepared to take up a short career in cage fighting if you knew it would make your novel a best seller?

I need to hear the soothing tones of beautiful poetry in order to stop me from losing it in public.  Could you please sum up the secret to eternal happiness in the form of a haiku?

No - but I did the next best thing and randomly constructed a haiku from words that matter to me:

Whale road
child, who steers,
to the stars in their paths.

“The word processor is mightier than the AK47.” Discuss.

Both will become obsolete, and very fast if used in a sandstorm. 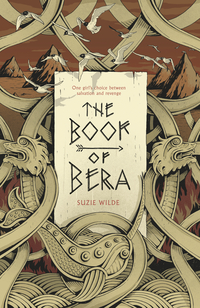 Where in the World Wide Web can I find out more about you? Have you a website? Do you twitter? Where can I buy this lovely book of yours?

I enjoyed this random set of questions, Paul. Thank you. I hope a non-guppy or unmayfly reader, having got this far, will menace an independent bookshop to buy a copy. Or online here: https://www.waterstones.com/book/the-book-of-bera/suzie-wilde/9781783522774

And off she popped. Stepping up the gangplank and away in her boat (which I was most shocked to see raise itself from the water of my moat, and drift off into the night sky; bolts of lightning appearing in her wake)

I should have stuck her in the dungeon and nicked her boat, I thought, as I watched it disappear off to Valhalla, or the Isle of Eight, Neverland, or wherever it was heading.

Never mind, I'll just have to read her lovely book instead.  You should too.

If you have enjoyed this interview and the others which I am posting please do return. I command it.