"Death is not the end"

The first words of my novel appeared on the page without me thinking about what I was about to write.  I just started typing and there they were.  Those words affected every other word typed by me until the book's completion and the final words of the novel (which incidentally are the same).  It has been a mystery to me since that time, and I gave it a lot of thought initially, until I decided that it was just one of those things and decided not to worry about where the phrase came from any more.  That is until today when I finally, and by chance, worked it out.

You see, I cried this week and I don't know why.

This is a strange occurence for me for a couple of reasons.  Firstly, and most obviously, it was odd because I have no idea what brought it on; it just happened.  Secondly however, and this will appear even more strange when taking into context the first reason, crying is not something that I do very often, in fact I can only remember about four or five significant times throughout all of my 46 years.

Now obviously I must have cried a lot as a child up until the age of about ten, everybody does.  Since then however such displays of emotion are about as rare as hen's teeth, they do not happen with me.  This is not to say that I am a cold person, I am not.  I get emotional in times of intense heart tugging moments as much as the next person.  I get affected by those things specifically designed to make you shed a tear, like charity television nights such as Comic Relief and, in the case of this weekends annual blubfest, Children in Need.  These well orchestrated pieces of emotional trauma and blackmail by media are designed by very clever well trained people, who know exactly the buttons to press at exactly the right time to get an emotional response from the millions of people that tune in.  They have developed their art over the years, they know what works and what doesn't, they know how to stimulate that part of the brain that gets tears and cash flowing.

I am not immune to this, I choke, I shift uncomfortably in my chair, and my eyes fill with liquid.  It's an autonomic response to stimuli designed for this purpose, and of course my body reacts, I have no control over this.  But this kind of damp eyed emotion is not the kind that I am talking about.  The moment hits me but it is not expressed in the extreme, it is not what I call crying; it is something more basic than that.

No, the tears which flowed today, and which I am at a loss to remember happening anything but infrequently since the age of ten, flowed freely, unrestrained and breaking out from the shackles of the pupil.  These tears were matched with other bodily responses; sounds, sobs, sudden and repetitive shoulder shrugs, and a sense of a loss of control, if only for a moment.  You see this week's performance did not last long, I was at work, and filled with the terror that someone might see me and, since I work at a secondary school, that someone might be one of the students.  It is not something that they would forget and it would not be long before I became known as Mr Holbrook; that one that cried.

I felt it coming, you see, and so I scurried off to where I knew I would not be seen and where my actions would not overnight be etched into the annals of school urban legend.  When I had reached a place where it was safe to do so, and where I could no longer hold it together, I let it out, just for a short time, just long enough to rid myself of the feeling so that I could carry on with my day without anyone being any the wiser.  It has affected me though, because it was unexpected and came without incident or reason.

I won't write here about the other four or five times that I have cried in the last 36 years, because there is sharing and there is sharing, OK well maybe one or two of them.

In 1982 when I was twelve, I went to the cinema with my older sister. The movie that we went to see,  thinking back,  was definitely my choice not hers.  Because it was Star Trek 2: The Wrath of Khan.  Now, I never professed to being much of a Trekkie.  Of course I watched series whenever it was on and I also really enjoyed the animated series, sometimes more than the live action original. 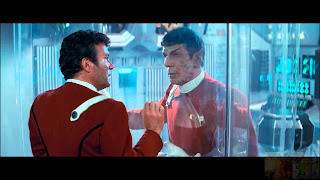 I was more of a Star Wars fan though, and still am in a lot of respects, despite my advancing years, but I had been to see the first Star Trek movie and had been one of the few in the cinema that had actually enjoyed it, despite the lack of action and the fact that it didn't hold a candle to Battlestar Galactica, which my Dad had sneaked me out of the house one night to see when my sisters were asleep.

For those of you that haven't seen The Wrath of Khan, where have you been and what is wrong with you? It's a great film,  one that is easily the best of the Star Trek movies, much better than the current crop.

But there is a segment at the end of the film where Spock gives up his life to save the Enterprise and has a drawn out death scene where he talks to Bill Shatner through a glass pane.  Looking back, and I have watched the film a number of times since, I'm not sure why it got to me as it did.  But got to me it did and, ever since that evening 34 years ago, my sister has revelled in that time when I burst into tears because a fictional character from a science fiction movie hammed up his death.  I'm not bitter at all, I don't blame her, that's what growing up with siblings is all about.

Another time where I went 'Full On Tear' is also related to a movie, but is not anything to do with a generic space opera and certainly has had more of a lasting effect on my life.  This is because it is my favourite film of all time. A lot of people that know me, if asked what my favourite movie was would probably say Star Wars or 'Some bloody awful horror movie from the sixties'. This is not the case.

My absolute all time favourite piece of cinema ever created is The Elephant Man by David Lynch.  It is just a beautiful thing and, although I have only seen it twice, it holds a very special place in my heart, the way that only the most special things should.  You will notice that I said that I have only seen it twice, and yet I call it my favourite;  I have seen all of the Star Wars films (even the crap ones) 20 or 30 times, The number of times I have seen Theatre of Blood is well into double figures, and The Lost Boys probably most of all.  But The Elephant Man only twice, why is this if it's my favourite?

Well it is precisely because of its power to reduce me to a blubbering wreck at the end.  I can happily watch the film all the way through, it is what filled me with my love of all things Victorian and made me want to write stories set in those times in fact.  But the last 5 minutes of that movie get me every time, uncomfortably so. 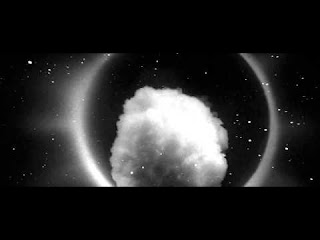 The first time I saw it, I was shocked at my reaction, I was with friends, who it did not effect and who looked at me like some kind of freak.  The second time I was alone, safe from outside eyes and prepared for the ending.  It still got me.

Which brings me back to this week's incident.

After my sudden flood of emotion today I began to think about my tears and why they had happened. I still don't know, which is worrying as that means that they could return at any time and I could still yet be the subject of classroom banter as 'that bloke teacher who burst into tears int he middle of English'.

It was as I desperately soul searched for the reason, and thought about those rare things that bring me to tears, that I remembered the ending to The Elephant Man, and with it came the answer to my inspiration for the first and last lines of Domini Mortum.


If you would like to read Domini Mortum, you can, I would highly recommend it.  There is a catch however; in order for it to become readable, first it has to be published and getting it published is entirely in your hands.  Domini Mortum is being crowdfunded by those lovely people at Unbound.  Please visit my Unbound page to find out more about the novel, read an extract and perhaps pledge your support.  There is nothing that will bring me to tears more than achieving my dream and you can make it happen.