Should the Dead stay Dead?

Should the Dead stay Dead?


I’ve been having a look back through old bits of writing lately, I say old but most of them were done in the last five years.  There are lots of bits of unused stuff there, the odd short story, ranty bits (that I produced when trying to get myself just writing anything) and then there are the unfinished novels, fully formed story ideas that are deep enough to make the grade.  Should a half-finished, once abandoned, opus ever be resurrected though? 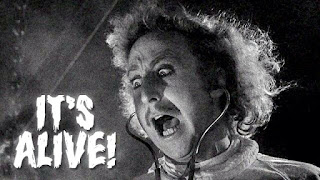 I have about half a dozen unfinished novels in various states of repair, most of these were created in what I like to call my ‘golden age of writing’, a nine month period in my life when I seemed to be so full of ideas that I couldn’t get them written fast enough.  During this time my brain was flooded with ideas on a daily basis and I was constantly hammering on my keyboard or frantically scribbling in one of the many notepads that now litter my desk and to which I return to when feeling particularly short of ‘writing oomph’. I flew through novel ideas regularly during those times and it is quite weird to now look back on some of them and wonder just what was going through my mind.  Some of these ‘uncompleted masterpieces’ are just a handful of pages of scribble; character names and back stories, scenes and scenarios and sometimes pen pictures for the first few chapters.  Some of them however moved forward from this scribbly stage to actual content.  These pieces found themselves at the mercy of the flurry of imagination and drive created by my mind, which I now find difficult to recreate.

I’ve been giving a lot of thought to why this period was so fruitful for me, despite most of the ideas and concepts never actually coming to much, and for the most part I think I can blame it on the medication I was taking.  Let me give you a bit of context;

About six years ago I suffered from a traumatic head injury, nothing too serious; there was no hospital admission, no surgery or life threatening interventions, but it was a head injury all the same.  I received sudden and repeated blows to both sides of the head over a very short period of time which, although having no physical effect on me, caused me to suffer from constant migraines and general head pain for about four months afterwards.  During this time I was off of work and spent my time at home, either asleep (my head didn’t hurt me when I slept) or in a world of silence; no television, no music, no computers, nothing through sound and vision which caused me to recoil in agony.  It was a difficult time, both for me and for my very understanding close family.


There were two things that I found that I could do though that didn’t hurt as much and they were writing and baking.  The baking had the terrible side effect of causing me the gain weight, through the continual production and ingestion of biscuits and cakes.  The writing however, that was a different thing altogether.  You see I had never tried writing before, not anything of any length or value, and I found that I liked it, it made me feel better.


As the months wore on and my headache slowly faded into the background thanks to regular medication I finally returned to work… and decided that I hated it and hadn’t missed it at all in the four months that I had been away.  It’s not that I wasn’t good at it; I think I was. It’s just that the job satisfaction element of it had gone altogether.  This lack of enthusiasm for the job, combined with having to catch up with all the work that I had missed led me to fall into a funk which I found it impossible to shake myself out of, and which eventually led to me resigning after falling foul of those in power.


I found another job quickly enough, albeit one for half the salary, but the funk remained and I found myself very quickly sat in front of my GP, unable to crack even the most feeble of smiles.  Her response was to increase the medication that I took for my headaches, they were antidepressants anyway as apparently they had a dual use for treating chronic headaches.  The effect on my mind was almost instantaneous.  As well as helping to lift my mood and give me a better opinion of myself, I also found myself to be bursting with ideas for stories and novels.  I remember reading an article back in 1995 about Bernard Sumner of New Order.  In this article he recounts how he used Prozac to lift him out of a 15 month song writing drought.  He claimed not to suffer from depression but, at that time, there was a lot of research and discussion about the use of antidepressant, particularly SSRIs (Selective Seratonin Re-uptake Inhibitors), as a creative tool.  I can certainly concur that this was the case with me, as I almost bordered on mania at times with the amount of ‘brilliant’ ideas that I was producing when I took the tablets.

Whilst writing this I have looked back at these articles and found something else pertinent to me and something which I now see when going through my old scrappy notebooks.  This is because of one of the main outcomes of the studies conducted with ‘creative types’ is that, although output increased and writing blocks could be broken, the actual content was probably not actually that good.  Quantity did not breed quality it would seem, and being a little down on yourself could actually be a good thing, and help to act as that filter that is needed to weed out the dross.


I don’t take medication to deal with my mental health issues any more, I’ve found that, on most days, the actual process of writing is enough to stamp on the demons in my mind and ‘bring the black dog to heel’ a bit (although he often howls outside my door).  I have been tempted to return to them though.  Sometimes when things have been so bad that I can see no real worth in myself as a whole, let alone words that I put together into stories, at these times I think of going back to see my GP just to get that little creative boost to get me writing again (better to write crap and exorcise the demons than not write at all).  I have resisted going back though, for now, and have looked at other avenues to get me writing, which brings me back to the whole point of this piece.


I decided to give NaNoWriMo a go this year, something to push me into writing, a way of putting myself into a headlock and squeezing something creative out of me.  I had a problem though, I am in a low and there are no great ideas for novels popping into my head.  And so I returned to the dross from the notebooks and the half started novels from a time when the reuptake of Seratonin was being thoroughly inhibited. I feel like I’m cheating a bit, using something half started to write a novel in a month, but really I don’t actually care.  The end justifies the means and all that.


The half-novel I’ve restarted is, I think, a good one, something worthy of resurrection, and reading back I wonder why I abandoned it in the first place.  I’ve added 10,000 words to it in the last week alone and at this rate I should easily meet the NaNoWriMo objective of 50,000 words in a month.  The most bizarre thing about the whole enterprise though is that it is a comedy and I find myself taking heart from the fact that some of my favourite comedy writers create funny from a dark place… and I know all about the dark places.

Hopefully my new novel will be fully written by the end of the month and past its first edit and drafting by Christmas.  If anyone fancies being a test reader for me please get in touch, and we’ll discover together if it was actually dross.


In the meantime if you would please consider supporting my crowdfunded novel Domini Mortum then I would be very grateful indeed.  Visit www.unbound.co.uk/books/domini-mortum to read an extract and find out more.


Thanks Paul
Posted by Paul Holbrook at 12:06