It was a cold day in hell.

The supposed heatwave, due to inflict the gentle valley that Holbrook Towers dominates, had not arrived. Instead it was a terrible July chill that sat unmoving throughout the castle and the village of Nether Stinkhole which sat at the valleys entrance.

Where was the blazing sun that had been promised? Where were the opportunities for swimming in the moat and engaging in terrifying bouts of naturism, that I usually enjoyed at this time of year?

Instead a numbing north wind blew through, carrying with it a rain so icy it threatened to strip the flesh from anyone daring to venture outside. I was not happy. I sat, huddled in the library, my Barney the Dinosaur onesie zipped up tight, and a thick woolen blanket around my shoulders. I had had enough and decided to complain to the authorities.

The quill trembled in my blue fingers as I scratched ink onto parchment, spitting my ire in black words upon the paper, sending verbal volleys to the cause of my hatred and anger.
I blamed God.

Now, those of you that know me and have read my scribbles may find it surprising that I believed in Him upstairs, but I do. That is not to say that I was a follower of him, no more than I am a follower of Genghis Khan just because I believed that he existed, or that I knew that there were stars in the sky, or that dinosaurs once roamed the earth. I trusted in his existence but that didn't mean that I was a fan. Especially not today.

I didn't know what I would do with the letter once written. Where does one send such a thing? But it was the process which was important, it was the process that brought some catharsis (however minimal). My therapist, shortly before he died, said that writing letters was an important part of the healing process, that if you could explain and express your feelings in the written word, you would be halfway there to getting any murderous and violent feelings off of your chest. (He also said that I should stay at least 200 metres away from his offices or he would call the authorities, but that is in the past. He is gone now. Although I still see his smiling face in one of the many formaldehyde filled jars on my mantlepiece).

I was struggling to write however. Why oh why couldn't I meet someone who was adept at letter writing to help me?

At that moment the doorbell rang, long doomy and metallic groans which resounded around the halls of the castle. My man, Manson, answered it.

When my visitor appeared, I felt that it was if my prayers had been answered. By who? I had no clue whatsoever.

Our conversation is recorded as follows:


Who the hell are you and what are you doing knocking at my door so late in the evening? 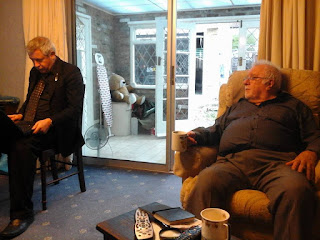 What's this book of yours all about?  Is it fiction, fact or somewhere in between?  Pitch it to me like your life depended on it!

A bit of both! My father and I pen demented letters to iconic pop and rockstars either picking them up on lyrical ambiguities:

''I'm sorry, Mr Difford, I hope you will forgive my sceptical bafflement, firstly concerning your claim to have to have taken her to an incubator at ten to five this morning where thirty minutes later she gave birth to a daughter. Although by no means experts in medical matters, Jean and I often watch Holby City when there is nothing else on and are quite confident that the aspirant mother would surely be ushered to the Maternity Ward upon her arrival at hospital. Said thermostat box would only be employed if complications arose after labour, and would house the infant and not the parent, who would in any case be too big to fit in it, irrespective of 'dress size'''

or deliberately getting the wrong end of the stick for comedic purposes:

''Dear Bruce Dickinson, I hear you are a keen fencer. Ours is leaning slightly to the left, hence I would be quite happy to consider any estimate for its straightening that you may care to draft up for me''

''Dear Mr. Joel, My friend Tony Beasley recently confided to a first date a nightmare he had had in which he was merely a head on a pole at a fairground and Kid Creole was throwing Peter Gabriel Toby Jugs at him in an attempt to win a singing can of tomato soup covered in crisps and wearing a blonde wig. Unsurprisingly the young lady left the restaurant before the mains arrived, causing him to question your advice that he tell her about it, tell her all his crazy dreams''

...for comedic purposes.. the artists then replies ''in character'' so to speak and we publish the 'duel' with their full consent. They are all in on the chaos before muskets are drawn. We are representing deranged members of the public, really.. Nearly ALL connections with these famous popstars, who are all great sports and get involved out of a love for the project, are procured via ''the back door of the industry'' on social media, via roadies, mutual fans, cousins of bass players, and even other famous participants telling the artists directly our pressing inquiries.

Just as often we think of a funny letter and can't connect with Iron Maiden or Billy Joel (see examples above), but we publish the jokes anyway, stand alone

You are onstage at Wembley, the crowd are going wild.  Suddenly, from stage right, a figure comes striding into view, microphone in hand ready to sing a duet with you.  Who are they and what song are you going to sing together?

It woudn't happen.. He'd  be like all famous duetters. I'd be singing the line ''The sun aint gonna shine anymore'' and he'll be ''ooh'' and ''ah-ing'' all over my vocal and shaking his head with his palm in the air and his eyes screwed up going ''oh that sun, that cruel cruel sun why don't you come out, come come come on we need you''.

I'm not having it Paul. He can sod off, whoever he is.

Get your own gig.

Your discontent with the world has reached an all time high.  You take to walking the streets carrying a placard, what does it say?

''This Is Not The Life I Ordered. Where Can I Get A Refund'' .. Not even with a question mark.. That'll screw them up

You have inherited a pub; you are now officially a pub landlord.  What is the name of your pub?  What type of establishment is it?  Describe a typical Friday night in the boozer of Derek Philpott.

I'd sell it.. I worked in pubs as professional singer for 20 years. I is done with them

Which pop/ rock star would be top of your list (alive or dead) to receive a reply letter from?

Scott Walker, Captain Beefheart, or Neil Innes, but we just scooped the latter. A Facebook friend recently said that she could perhaps get me a reply from The Shadows. I'll just leave that comment with you for a second.

You've been a very bad boy, Hell awaits.  What would your own personal living space in Hell would look like? Describe the ambiance, the music playing on the stereo, the food served to you daily, and the activity you would have to undergo for eternity.

It would be a Jam Night at a pub, forever, blues only. There is no stereo. Marrow stuffed with mince. I'd have to clap and demand ''Red House'' again. And again, and again and again

Poetry can be both an art form and a means of torture.  Which camp do you sit in? Hopefully the latter as I now demand a short rhyme.  It can be in any form but Today I am particularly fond of limericks.  Show me your skills.

I like good poetry yes. I like Blake and the Wordsworth one where he nicks the boat and the mountain makes him queasy. 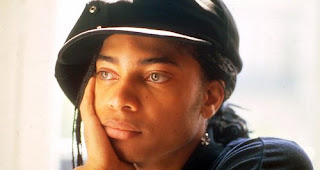 There was a young lady called Barbie
A Big Fan of Trent D'Arby
She wrote to his website in search of some insight but was told that his name was now Sananda Da Maitreya and that Sananda no longer reads emails that address to him using his old artistic name.
Get over yourself Tel.

I bestow upon you the gift of shape changing. It only lasts a week though.  Whosoever would you lead for the week, and what foul shenanigans would you do in their name?

I would take on the form of Kanye West and not act act like a self-obsessed arse. That'll screw with their heads 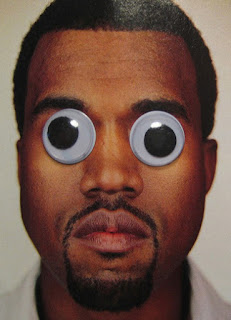 Just Facebook and the Unbound page for our next book

We sat for a while putting the finishing touches to my own letter.  Once complete, my new friend offered to post it when he next passed a church and bade me goodnight.

I sat back on my Chesterfield and wondered.  How fortuitous it was that my visitor arrived just when I needed him.  It's almost as if someone out there is listening in.  Weird.

Anywho, I decided to purchase of copy of his most excellent book when it becomes available.  You should too.


If you have enjoyed reading this blog interview, please feel free to explore my interviews with other Unbound authors.


If you yourself would like to pay a visit to The Castle of Despair for your very own author interview then please drop me a line at caraticuspholbrook@gmail.com

I would also be incredibly grateful if you would consider giving my own attempt at literary glory a look. Pop over to my Unbound page www.unbound.co.uk/books/domini-mortum